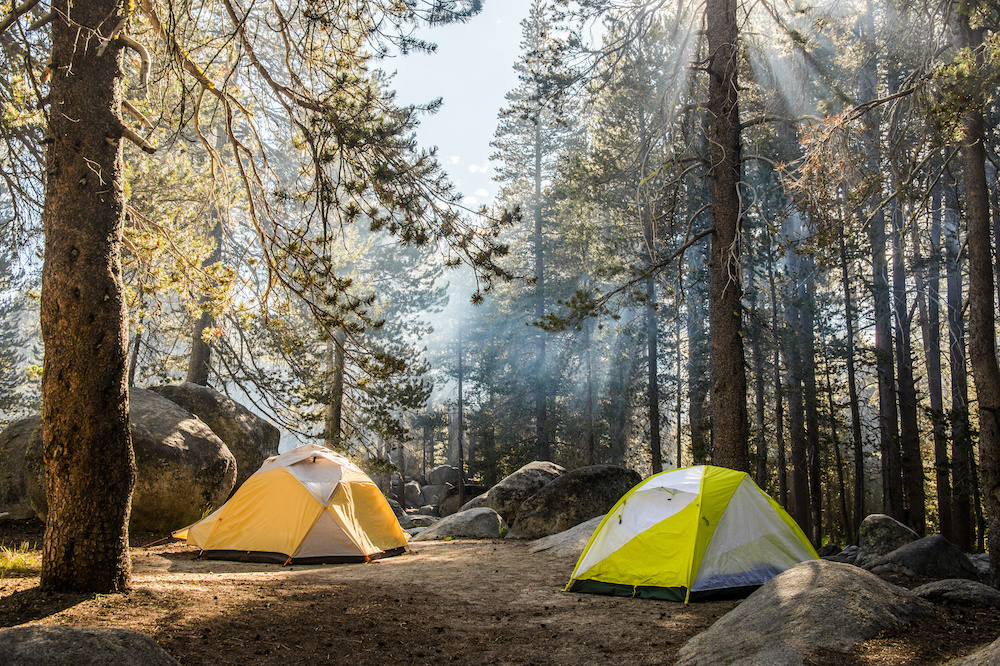 Who doesn’t love a nice camping trip? The starry sky, fresh air, cricket sounds—all of it is enough to relieve you of all your worries.

It’s the perfect way to get away from your busy city lives and go off the grid for a while. However, your camping trip can only be as good as your camping site.

Some can be pretty dangerous, while others are a bit inaccessible. A good place to camp can be your nearby national parks.

Can you camp in national parks, though? Well, that’s what we are here to find out.

Aside from that, we would also share with you other rules and regulations for camping in national parks.

Quick Navigation
Can You Camp in National Parks?
Facilities and Regulations
What About Fees?
Can You Reserve a Spot Prior to Your Trip?
More Important Things to Remember
Final Words

Can You Camp in National Parks?

So, can you camp in national parks? With a few exceptions, yes, you can, but it depends.

The National Park Service, a government agency, is responsible for managing and preserving all the national parks, historical sites, monuments, and the likes across the different states and cities.

There are almost 420 national park sites all across the United States. These sites stretch over more than 84 million acres.

However, not all of these national parks allow you to camp on site. At least, not always in the way you would like.

Sounds a bit confusing? Allow us to explain.

These national parks get more than 330 million visitors every year, which is a lot of people, obviously.

Therefore, to maintain and conserve the history and resources at each site, different parks have different regulations regarding what visitors can do there.

While most of them allow camping, there are a few that do not. For instance, Central Park in New York City doesn’t allow any sort of camping.

It has a fixed opening and closing times, and you’re not allowed to set up tents or build fires.

On the other hand, you have the Sawtooth National Forest, where you can go by the Redfish Lake and camp and hike as much as you want.

Some parks will allow you to bring your car or RV and set up your tent at the campsite.

Others might not allow this, so you will have to do backcountry style camping.

This type of camping involves carrying all your gear on your back and going on foot to the campground.

Moreover, you also have to consider the season. Some parks might generally allow camping, but in some extreme seasons or weathers, they might close the park for camping.

Now that you know that you can generally camp at most national park sites, it’s time to move to other vital questions.

First, what can you do while camping at national parks? This depends on the various facilities and amenities available at each park.

Different national park sites have different terrains and structures, which then encourages different kinds of activities.

For instance, if you’re visiting the Denali National Park in Alaska, you wouldn’t want to stay huddled up inside your tents or RVs.

Instead, you might want to spend time stargazing to catch a glimpse of those northern lights.

Some parks, which haven’t been developed much, might be better suited to hiking and other similar activities. Other parks have facilities that allow you to gather and spend time in one place.

For example, some of the campgrounds at Yellowstone National Park have generators that provide electricity, toilets, showers, and even laundry services on site.

At places like this, you can comfortably plan a get-away for several days with your loved ones or even as part of a school or corporate event.

Other than that, many parks offer other activities as well, besides just camping. You can go climbing, biking, horseback riding, hiking, etc.

Additionally, you’ll also have to check up on the rules and regulations of the park.

If you are thinking of building a fire and cooking fish you caught from a nearby stream, well, some places might not allow that.

Some national park sites might allow hunting, but only if you’ve got the permit for it.

Another thing you’ll want to work out beforehand is the fees for camping at a national park.

If you’re just randomly going camping in the middle of the woods by your house, then obviously, you don’t have to worry about paying anything.

However, if you’re planning to go camping at a national park, it’s a different story.

On average, the fee for one person is usually somewhere between $10 and $20. However, you may find some that charge as low as $7.

If you’re bringing along a vehicle, the charges can increase to $25 or $30 or even more depending upon the type of vehicle.

The fee for motorcycles is lower than other vehicles but higher than just for a single person. Now, those were just for plain visiting.

When you talk about camping, the numbers change according to each national park site.

For instance, let’s talk about Yellowstone National Park again. The campgrounds with very basic facilities have a per night charge of as low as $15.

However, some of the more developed campsites charge more than double of that, at $32 per night.

Other than that, some parks only charge the entrance fees and waive off the camping night charges.

Others might charge both separately. If you have a special pass, such as America the Beautiful Pass, you can get discounts, too.

Can You Reserve a Spot Prior to Your Trip?

If you are the type of person who likes to plan every little detail and not leave anything to chance, then you might be thinking of making a reservation.

It could be for yourself only or, if you’re going with a large group, then, for everyone. Either way, making a prior reservation can be a smart idea.

However, you’ll have to check whether the park you’re going to allows it. Usually, though, most park sites don’t really take reservations.

Instead, they work on a first-come, first-serve basis.

In some cases, they might have a quota on reservations and keep the rest of the campsites on a first-come, first-serve basis.

If you’re going camping during the offseason, you probably have nothing to worry about.

However, if you’re going during peak season, a reservation would be best. Alternatively, try to reach there early so that you can secure a good spot.

By now, you are probably all excited to pack up your gear and head to your nearest national park.

Now, before you do so, you might want to take note of a few important things first.

With global warming and climate change rapidly happening all around us, it has become even more important to visit and spend time at nearby national parks.

We should observe and learn about the different endangered plants and species before they disappear.

More importantly, we should take special precautions not to harm any of these creatures or resources found at national parks.

Camping is an excellent activity, whether it’s done with friends or family or even alone.

Most important of all, it should be done responsibly while following all the rules and procedures of the camping site.

As an Amazon Associate I earn from qualifying purchases. Keep in mind that we may receive commissions when you click our links and make purchases. However, this does not impact our reviews and comparisons. We try our best to keep things fair and balanced, in order to help you make the best choice for you